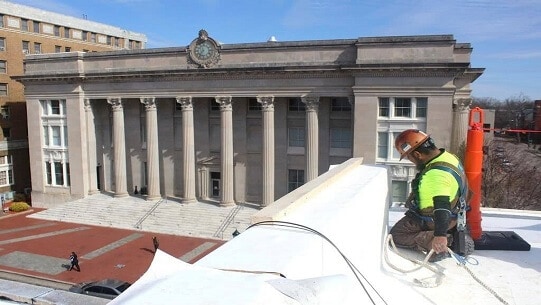 Wilson, NC – One of Wilson’s most noteworthy historic buildings is getting a new roof. The Wilson Arts Center, located in the historic BB&T Community Building, is having its roof replaced. “Everything is old, so you just have to be careful of what you do,” said Perry Rawls of Rocky Mount-based BM Roofing, the company doing the job.

The outfit got on the scene on Feb. 7 and hopes to complete the job in about two weeks, weather permitting. Located at 124 Nash St., the structure was built in 1903 and was the originally home of Branch Bank and Trust, later known as BB&T. It was placed on the National Register of Historic Places in 1978. The Arts Council of Wilson began using it in 1989.

“As far as being able to work with something this old and with this much character, I’d rather do this way more than I would like to go out and do something brand new,” Rawls said. “Our company kind of likes the idea of doing work like this and preserving old buildings.”

Rawls is supervising a crew of eight contractors who are installing a Duro-Tuff membrane to the roof. “It’s just a tear-down all the way down to the wood deck or the concrete deck,” said Rawls. “Everything here was completely tore off down to bare wood and bare walls, just as if it was constructed brand-new.” The parapet walls have been reconstructed on the entire perimeter.

“We screwed down sleepers to the deck, tied the plywood to it so it would shore the wall up because the mortar is 100 years old,” said Rawls. “We did everything we could to strengthen that wall up. “We’re totally encapsulating it in this membrane. There will be two pieces of compression metal trim all the way around the outside of this building.”

The new roof is certified to withstand 120 mph winds. “If it blows that metal off and blows that membrane up, you’ve got some serious troubles,” Rawls said. “Putting a roof on is important. everything that is underneath us is 100 percent protected by what we do, so we’ve got a lot of responsibility. We’re liable for everything underneath my feet.”

The crew has been working around the edges of the structure nearly 40 feet over the streets below. Each worker is tethered by a safety line. “Every Monday we have safety meetings. Safety is a huge, huge issue,” said Rawls. “We’re 100 percent safety-conscious. We’re all safety-certified.”